Sam Baxter
My first impression as I walked up to the Auditorium was "Whoa....This is much bigger than I was expecting!". The buzz from the lobby suggested that there was a large number of delegates for the conference. As I stood in the queue for my delegate pack the number of lanyards on display confirmed this, and I took to the Alumnae room for the obligatory coffee. Before taking to my seat in the lecture hall I had already spoken to enthusiastic educators from China, Brussels and Cyprus. Taking out my delegate pack I was able to see the numbers involved. There were 170 delegates for this course from all over the world, and it finally sunk in... This conference was a very big deal. How awesome is this going to be!!!

The conference was introduced by Professor Ethan Danahy (Later to be confirmed as Dr E), Research Assistant Professor for computing at Tufts, and Centre for Engineering Education and Outreach. He was kind of a big deal, but informed us that even though they had purposefully kept the conference very small, that the main purpose was for us to share and learn about the good practice going on internationally with LEGO and STEM education. 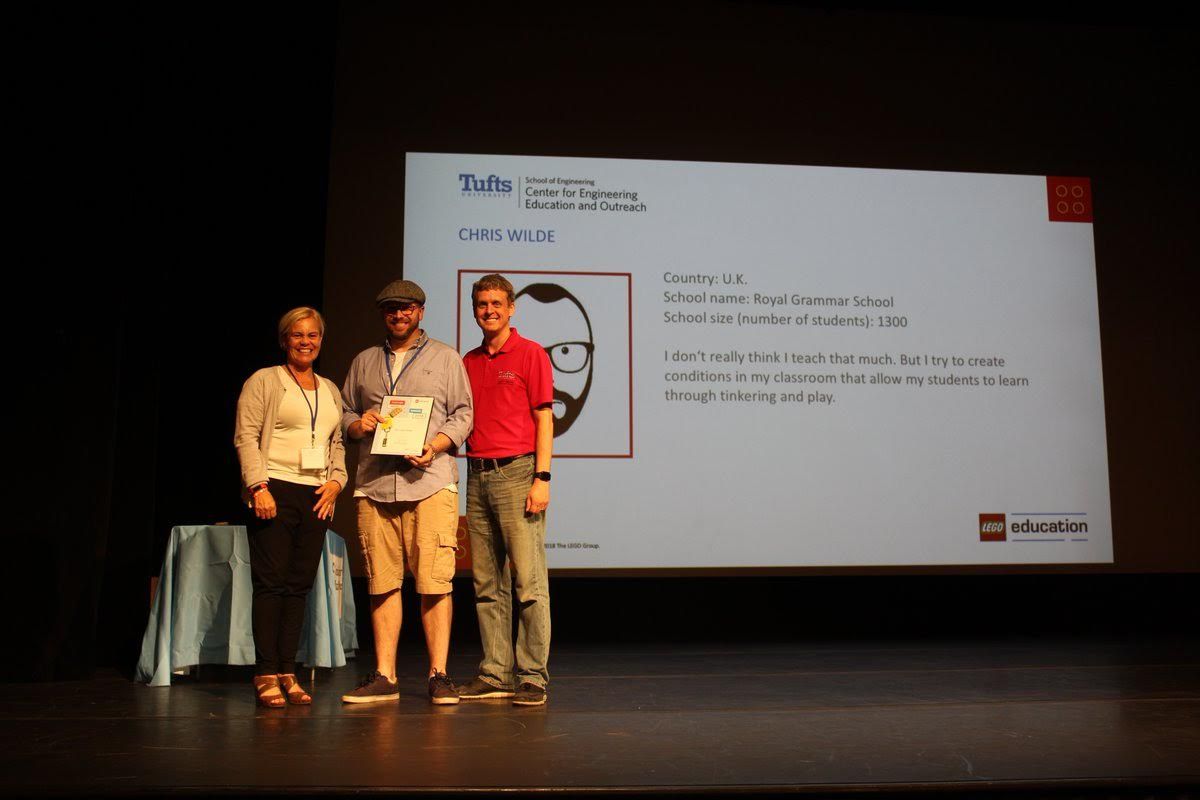 Ethan introduced our keynote, Jake Foster from the Massachusetts Department for Education. His job was to design future-proof learning programs and spaces for . His main point was that our pupils will live in a world we can't predict, so we need to prepare them to be resilient and diverse. His main points were that regardless of the content we teach we need to ensure that pupils are encouraged to be independent and think broadly. That STEM teaching needs to be truly linked though collaborative projects, and that the best way to ensure effective pedagogy is through "Relevance, Coherence and Rigor". What struck me during this presentation is that the issues we face as educators are the same worldwide.

Our next our keynote, it was time for workshops. As a keen Maker with my pupils I had signed up for Barbara Bastle's "LEGO and the Maker Movement" session, and I wasn't disappointed. What I took from this session was the notion of extending the Lego product with non-Lego additions. Our first activity was a fantastic example of this. The simple addition of a finger puppet to a circular axle brick gave a whole new set of possibilities (I'm off to Ikea this week :-)). I was also keen to learn more about the capabilities of personal fabrication during the trip, and Barbara has 3D printed and laser cut a variety of additional materials for her workshop in her Makerspace, ranging from brick tops, to hub caps, larger gears, and pen holders. I'm a sucker for art robots, so I am looking forward to developing some of these with the .stl files Barbara shared. Another point of interest was the use of the technical language during this session. I got to find the names of a number of brick parts, and also the different areas of the EV3 software. We made puppets dance, created a music machine and even made some "Sound Stairs" as a group. This was a really fun session, and I took a lot away from it.

Over there was more networking time. I had some fantastic conversations with Joe from a junior school in Florida, Ninoshka who runs a teaching in Costa Rica and Marlene, an international educational consultant from Mexico. This event was truly international, and everyone was keen to share their experiences and expertise.

Our afternoon kicked off with a series of short talks from a variety of presenters around the impact that Lego can have on education. We learned about Lego for the Blind from the inspirational Matthew Shifrin (Find out more HERE). Rob Torok introduced us to the Lego Engineering community and his fantastic EV3 Pinball Machine. Ethan Dahany spoke about the role Lego robotics plays in his college classes. His explanation of the low floor, high ceiling model is something I use regularly in my pedagogy, and I was particularly interested in Ethan's development of interaction between EV3 and Raspberry Pi's. Our final talk was another inspirational story from South Africa by Brent Hutcheson, whose "Six Bricks" initiative is helping young people in the townships in truly fantastic ways.

My second workshop was titled "Advanced Play with Lego EV3". I was really looking forward to this and wasn't disappointed. As I am planning on using EV3 with my new Y9 computing cohort in September, I was keen to learn some advanced techniques and tricks to develop my new unit, and I found exactly what I was looking for. This session taught around the theme of "The little red hen" focussed on problem-solving around agricultural automation. I teamed up with Ernesto from Mexico and Muno from the Netherlands to create a remote-controlled tractor. We were able to develop broadcasts over a Bluetooth connection between 2 EV3 bricks. This first created a variable from the encoding of 2 servos and sent these signals over the connection to control the power of the servos on the "Tractor" EV3. Other groups completed a variety of different tasks ranging from IR beacons to a very cool "Pixi" cam. It was great to have a difficult problem to solve and the support to help us gain success. Special thanks to Rob Torok, Josep Fargus and Katie Kelly for the ideas and support during this session.

Our final session was a celebration of 20 years of collaboration between Tufts University and Lego education. It was great to see how Lego Robotics developed over the years, and also to hear from the key players in the development of these objects to think with. From my perspective it was fascinating to hear from a group of people who worked with Seymour Papert, an educator I really respect and whose work I have used to inform my methodology. Lightning talks from Robert Rasmussen (former R&D director at Lego Education), Chris Rogers – The father of Robolab, Daniel Mathiasen, Concept Director, Digital/Physical Play at Lego and Meredith Passmoor, a Director at the aforementioned CEO all contributed to a great focus of where LEGO Education started, how it has developed, and the vision for where it is heading in the future.

I left the conference with my mind racing and head buzzing. The only thing to do was to go away, have a think and try to chill out with a couple of beers. Boston has a great craft beer scene, so I decided to see what it was like for a couple of hours.